St Mary’s Church of England Primary School was 450 years old in 2013, making it one of the oldest schools in the country.

A school house was built at the side of Old St Mary’s Church in 1563 which housed our first pupils of varying ages. The school then moved to the other end of Church St, before it moved again to our current site in Barn Street in 1866.

In 1945 St Mary’s became a primary school, older children that has attended the school were moved to Church Street Secondary School, now William Pattern Primary School. With the demoloition of some shops and houses on Barn St in 1980, St Mary’s aquired some more land to extend the school along Barn Street. In 2000 the school opened its Nursery building enabling the school to admit pupils from 3 years to 11 years.

In 2013 the school community celebrated 450 years of the school which included a Shakesphere themed production and the making of the schools stained glass window.

We look forward to the next 450 years of educating our community. 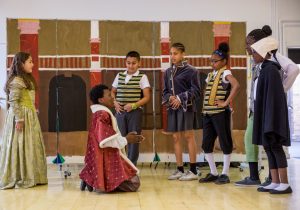